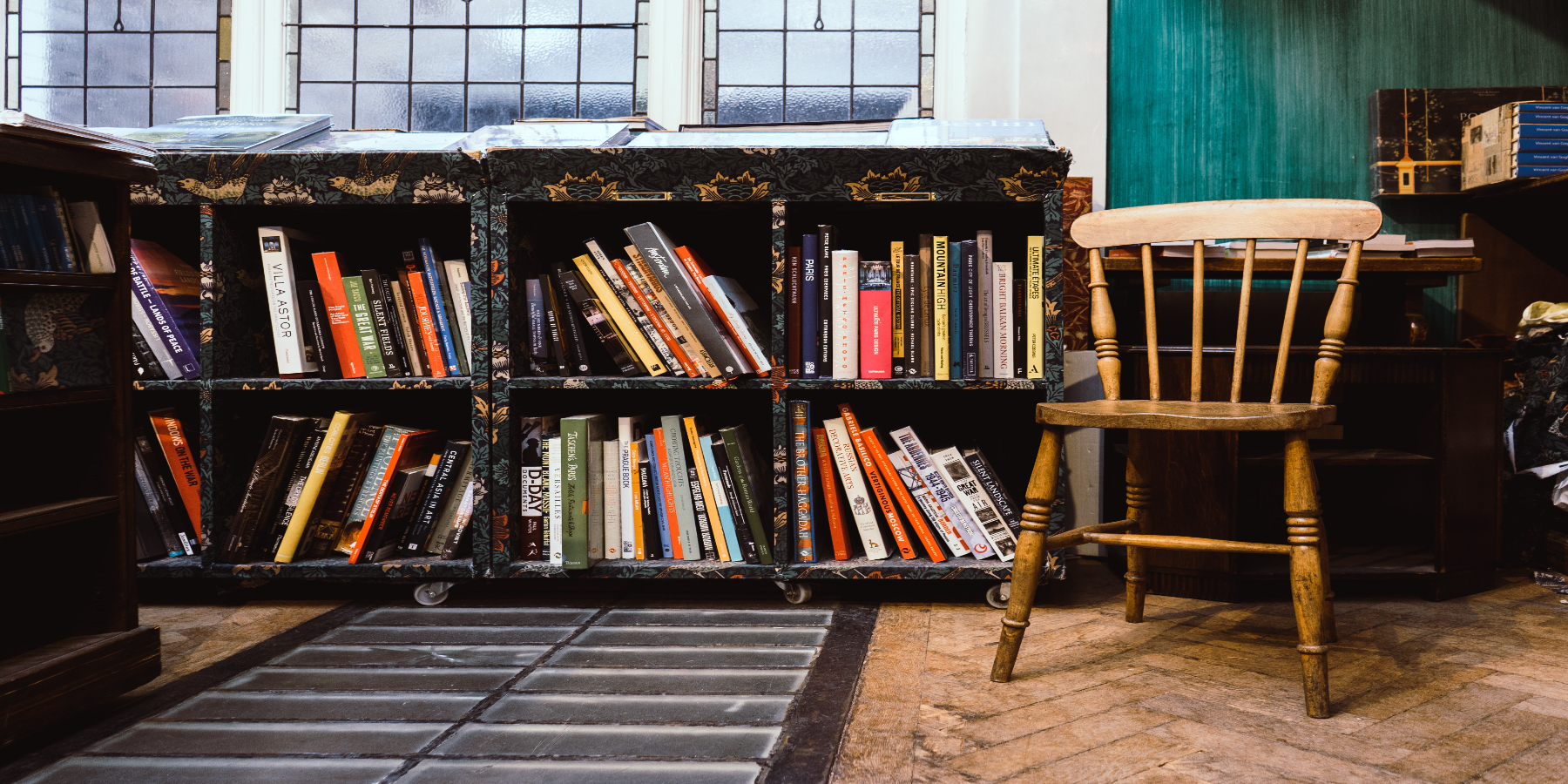 Being a bit of a squirrel means I can get very sentimental about my stuff. I was always fascinated and amused at the way the Mona Lisa – considered to be one of world’s greatest artistic icons, was ‘abused’ by mischievous designers.

Over three decades, I amassed thousands of items of abused Mona Lisa printed, painted and handmade ephemera. Moving four years ago meant that three large packing cases were needed to house the collection for removal. And there they have stayed ever since, still unopened…*

Cheryl Carter runs Every Home Matters, a company that de-clutters older people’s homes in south west London. Here, she tells me a bit about her work.

“De-cluttering an older person’s home is always different for each individual, but the one recurring and challenging aspect of this work is how they will react to the change that inevitably arises from a necessary cull of one’s possessions, be it from moving and downsizing a home or dealing with the overzealous accumulation of objects and possessions over the years.

“We all become attached to possessions to varying degrees and for various reasons, and none, it would seem, are stronger than sentimentality. Many older individuals, however, not only find it hard to part with possessions for this reason but also because of their personal circumstances and experiences. Some individuals hoard various items because of a ‘make do and mend mentality, drilled into them during and after WWII.

“Others cannot bring themselves to let go of things because they feel that they have a monetary value that may be of benefit in the future. Some simply cannot let go of stuff because it has always been there… and for a long time!

“Personally, my aim is always to tidy up as I go! I was the youngest of four, with both parents working full time whilst growing up. All of us had household chores and responsibilities from a young age and a structured routine. It is something that has stayed with me since.

For most of my life, my mother has been in poor health and she spent a lot of time in and out of hospital. There is quite a big age difference between my siblings and me, so they reached independence while I was still quite young. As a result, I took care of her whenever she was unwell, particularly when she came home from hospital after surgery or illness.

I had to learn to clean and tidy and ensure the smooth running of the home. My father was a cartographical land surveyor. He would leave the house very early in the morning for work, but being the Daddy’s girl that I was, I always had breakfast with him. At weekends I would help him with DIY and odd jobs around the house.

When my mother was well she worked full time as a PA, so I would spend summer holidays at my grandmother’s house and I would keep her company and to help around the house.

My grandmother’s father had been in the armed forces in India, so she had had a very privileged life whilst growing up and starting a family of her own. When India achieved independence, my parents and their families returned to the UK. The transition was a significant shock to their way of life, leaving daily household help for to a life fending for themselves.

I recall dusting and polishing my grandmother’s innumerable china, porcelain and brass ornaments – it was always interesting to hear her stories and memories attached to the objects as we cleaned and replaced each one.

“Now, I frequently work with clients who are vulnerable, living in isolation, and suffering with illness and/or depression. One elderly gentleman was facing eviction from his sheltered accommodation. His plight was brought to my attention by an advocacy agency that the sheltered home manager had contacted due to the poor condition that he had allowed his dwelling to get into.

The housing association were not only concerned about health and safety issues arising from the accumulation of hoarded items and rubbish in his dwelling, but trades people were also refusing to enter the property to carry out maintenance and essential repair works, because of the unhygienic and unsanitary conditions within the accommodation.

How we helped connect our client with Social Services

When I met the gentleman in his late seventies with the advocacy agency worker, it was agreed that I would start a declutter and deep clean of his dwelling and we signposted him to Local Authority social services and other relevant support groups. This poor man had experienced two major heart attacks and was suffering with extreme anxiety and severe depression, which had lead to his neglect of both himself and his surroundings. For fear of his health deteriorating further, he had taken to his bed and had become more withdrawn and isolated. For some reason his doctor had failed to contacted social services even though it was quite apparent that he urgently needed help and support.

Initially, he would not engage in conversation with me, but a friendly and empathetic approach worked and gradually we made good progress reclaiming his home. Eventually, it seemed to bring him back to life and even put a smile back on his face. He asked me if I would phone him on regular basis to chat and check if he is ok, something that I still do now.

He began to tell me about his life.

He had no surviving family or friends and was fearful for his health. Despite this gentleman’s intelligence, he was surviving on unheated tinned foods. There were no working refrigeration or cooking facilities and his kitchen was overrun with clutter and rubbish.

After an urgent Social Services assessment, care agency carers were appointed to assist him. Unfortunately, some were only in their late teens, sometimes they would visit for no more than 10 minutes. Some asked to borrow money, never to appear again. I offered to complain on his behalf, but he asked me not to, being too scared of possible repercussions, especially as the carers his front door key safe code. Respecting his wishes, I approached the issue with the advocacy worker from an alternative angle.

We informed social services that although the carers were visiting, no one was actually fulfilling the duties assigned to them such his washing and cleaning. As a result, they finally made arrangements for him to move to an Extra Care Home. We assisted him with his move. This gentleman has no family or friends, so I have assured him that if he ever needs any help and support, or just someone to talk to, he can call me at any time.

He now receives the level of support that he needs and is able to interact with other residents. He has regained his confidence and seems to be altogether happier. I am so pleased that this gentleman’s life has been transformed. He now participates in group activities and has joined the chess and snooker club locally. We are still in contact and speak on the telephone regularly.

“Earlier this year, I was asked to assist a gentleman in a care home with the clearance of a very large hoard that he had accumulated in his room. He had been living there for about seven years. He had accepted that his room needed to be cleared, not only for a better quality of life for him, but also because of health and safety at the home. The hoard was substantial, considering the size of the room and filled the whole space from wall to wall and from floor to ceiling, with only a narrow walkway from the door to his bed and from his bed to the ensuite toilet. This was crammed so full that it was unusable, which meant he had to use the communal facilities instead. It was not the scale of the hoard that surprised me, but the nature of it did.

As we worked methodically through the items, it became apparent that everything in the hoard, without exception, was brand new, unused and still in its box. Smaller items had been neatly boxed together in bigger boxes which had in turn been neatly labelled with their contents. As we worked through the boxes together removing one at a time from his room to the van (without a single objection from him) I started to notice a clear pattern to the items that he had amassed over the seven years. The hoard simply comprised audio and audio visual electronic equipment, music CDs, tools of every description, boxes of glue – and hundreds of toilet rolls.

Having cleared the items to sell them for him on eBay and at auction, we were able to buy shelving to store his large collection of music CDs. After seven years of having them all boxed up and with no access to his CD player in the far corner of the room, he is now able to play and enjoy them.

“I guess for me, the most challenging aspect of de-cluttering an older person’s home, can be understanding what they feel they can cope with letting go of and then helping them deal with the accompanying emotions.

We have a tried and trusted process, working closely with clients to achieve a desirable transition, which leaves them with no regrets for having disposed of a large quantity of accumulated stuff and delighted with their new found living space.

* PS If anyone is interested in taking the collection off my hands, do let me know!

If you need help decluttering, we can take the project off your hands.

Leave it to us!

Contact Us today and arrange an appointment to get started.